AS A PART OF SUSPENSION SYSTEM: SHOCK ABSORBERS

The suspension system is working like a launching system due to the fact that it soften the weight which is coming on to the springs and it transmit that weight to the reverse direction. In other words, in the vehicle which pass through a bulge, tire get closer to the chassis so spring compresses quite and while spring becomes its normal form, it pushes back the tire with a great force and the vehicle, which is bouncing upward, settles down to the ground again with the gravity and compresses the spring. These oscillations proceeds without any discontinuance and they are absorbed by a small piece; the part, which eliminates that ongoing oscillations with absorbing them, is called as shock absorbers. 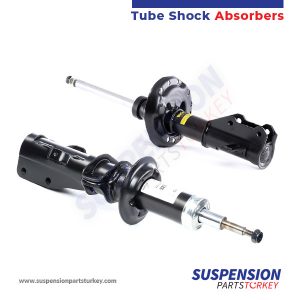 The Working Process of Shock Absorbers

When imposing a burden on shock absorbers, they are forced to close. Meanwhile, with the closing of the shock absorber, the damper shaft, which has a piston on its edge, tries to move downward in a cylinder which is filled with hydraulic oil. However, according to incompressibility of liquids principle, hydraulic liquid replaces. While the pressure of the piston continues, hydraulic liquid tries to leave out through the two sided valved little holes. Thus, shock Absorbers starts to close slowly and absorbs the great amount of pressure,which is pressing on it, as a friction force of hydraulic liquid. Furthermore, when pressing shock absorbers from opposite direction, which means it is forced to open up, the liquid tries to fill in the below again through the two sided valved holes and shock absorbers starts to enlarge slowly. Consequently, whether it is enlarging or compressing, the motion of the piston, where is in shock absorber, is transmitted with decelerating. As a consequence, the oscillation and vibration of tire is eliminated for as short as possible.