AS A PART OF SUSPENSION SYSTEM: SPRINGS

Suspension Parts : Springs carry all weight of the vehicle excluding the tires. Thanks to their flexible structure, they minimizes the recognition of the concussions with ensuring wheels that they are closer to the chassis at the bulges and remoter at the holes. 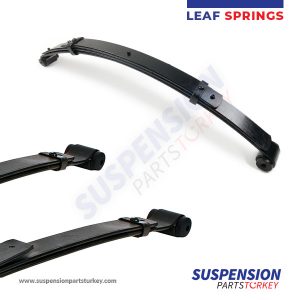 They are usually used in the production of trucks and old type automobiles. The leafs, which are manufactured with spring steel, are fixed by clips after they are superimposed together. This system, which is constructed by superimposition of leafs that have different sizes, is used in the production of the vehicles which are used for transportation of heavy cargos. While all parts are connected together by a center bolt, both edges of prime leaf are twisted towards front axle and hanger systems and fixed to them. During the springiness process, the leafs of the spring make gliding with frictioning to surface of themselves and minimizing that friction elongates the lives of the leafs. The springiness process is revealed by the glidings which are made by the leafs and this springiness absorbs the energy which is sourced by the vertical acceleration. At the present, this system is hardly used by manufacturers due to its inefficiency. 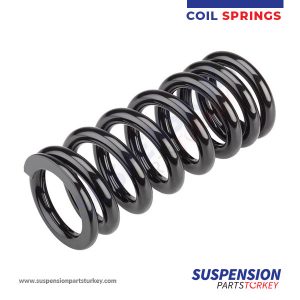 Coil springs are used in the hanger systems of automobiles and coaches. It is shaped by heating the stripes, which are manufactured with round cross sectioned spring steel, and then wrapping it into molds and this process is performed according to place the edges of the spring into spring plate. Due to the fact that all vehicles have different weights, the diameter of the springs and the number of the link are produced according to that. Coil springs are connected with the front hanger system, where is between the top and bottom wishbones. Coil springs are replaced by new ones when they break or lose their flexibility and there is not another maintenance requirement in addition to that option. 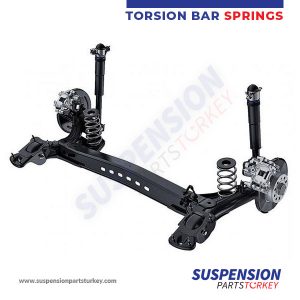 Torsion bar springs consist of one or more than one long steel bars and these bars are manufactured with materials which are resistant to torque. One edge of the bar is shaped as square by producer and fixed, in way that is avoiding the turning of the bar, to the chassis of the car. Another edge is connecting to any edge of the hanger system and thereby it soften the motions of the wheel with provide springiness. Their production life is likely to be short and they might break after sudden and hard presses. It can be observed that they are used in the rear suspensions of the vehicles. 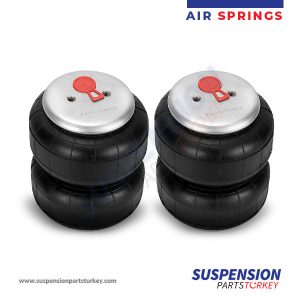 Air springs are used in the air hanger systems. In this system, there are airbags in all tires rather than springs. This system is usually used in the trucks, coaches or any kind of heavy freight vehicle that have compressed- air system. Airbags consists of tire bellows which are inflated with air in a protective container and all weight of the vehicle gets on that airbags. Airbags are inflated with the compressed air which comes from the compressor of the vehicle. The valve of level arrangement, which is a part of the system, ensures the equal distance between the case and the axle in all positions. Specifically, the pit man arm of the level arrangement valve is connected with axles. In the case of high level of weight of vehicle, case sits on the airbags and thereby it is likely to be closer to the axles; with the collapse of the airbag, pit man arm impulses level arrangement valve which leads to increase the compression of the air that fills the airbags and the airbags starts to inflate until the determined position which is between the case and the axle. Adversely, while decreasing the weight of the car, all system proceeds as vice versa. Consequently, it can be supported that the distance between the case and the axles is always fixed by airbags.